A team of scientists from the Institut national de la recherche scientifique (INRS), in collaboration with TU Wien, Austria, the French national synchrotron facility (SOLEIL) and other international partners, has reported a breakthrough in understanding how spin evolves in extremely short time scales - one millionth of one billionth of a second.

So far, studies on the subject strongly relied on limited access large X-ray facilities such as free-electron lasers and synchrotrons. The team demonstrates, for the first time, a tabletop ultrafast soft X-ray microscope to spatio-temporally resolve the spin dynamics inside rare earth materials, which are promising for spintronic devices.

An international team that included scientists from Japan's RIKEN and the Australian National University have shown that Water waves can be used to visualize fundamental concepts, such as spin angular momentum, that arise in relativistic field theory. This could help to provide new insights into different wave systems. 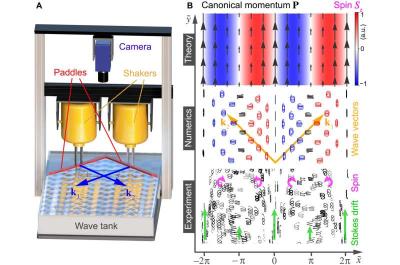 The spin of an electron is usually described as the electron spinning on its axis, similar to a spinning top. However, this is a simplistic explanation and a fuller description of spin is more abstract. Now, Konstantin Bliokh of the RIKEN Theoretical Quantum Physics Laboratory and his team have shown that spin can appear as small circular motions of water particles in water waves.

University of Nebraska-Lincoln's scientist Christian Binek and University at Buffalo's Jonathan Bird and Keke He have teamed up to develop the first magneto-electric transistor.

Along with curbing the energy consumption of any microelectronics that incorporate it, the team's design could reduce the number of transistors needed to store certain data by as much as 75%, said Nebraska physicist Peter Dowben, leading to smaller devices. It could also lend those microelectronics steel-trap memory that remembers exactly where its users leave off, even after being shut down or abruptly losing power.

A team of researchers from Ames Laboratory and Iowa State University, as well as collaborators from the United States, Germany, and the United Kingdom, have reported on new Fermi arcs that can be controlled through magnetism and could be the future of electronics based on electron spins.

During the team's investigation of the rare-earth monopnictide NdBi (neodymium-bismuth), thet discovered a new type of Fermi arc that appeared at low temperatures when the material became antiferromagnetic, i.e., neighboring spins point in opposite directions. Fermi surfaces in metals are a boundary between energy states that are occupied and unoccupied by electrons. Fermi surfaces are normally closed contours forming shapes such as spheres, ovoids, etc. Electrons at the Fermi surface control many properties of materials such as electrical and thermal conductivity, optical properties, etc. In extremely rare occasions, the Fermi surface contains disconnected segments that are known as Fermi arcs and often are associated with exotic states like superconductivity.

A research team from the Technical University of Kaiserslautern (TUK) has been awarded a Consolidator Grant from the European Research Council (ERC) to develop spintronic devices.

Professor Dr. Mathias Weiler, lead of the study, will receive €2 million over the next five years. Scientists are working on spin waves and new spintronic devices that could drastically accelerate the storage, processing, and transmission of information.

A team of researchers from Goethe University, Fritz Haber Institute of the Max Planck Society, Uppsala University, HZB, Paul Scherrer Institute and the Basque Foundation for Science has identified materials that have surprisingly fast properties for spintronics.

"You have to imagine the electron spins as if they were tiny magnetic needles which are attached to the atoms of a crystal lattice and which communicate with one another," says Cornelius Krellner, Professor for Experimental Physics at Goethe University Frankfurt. How these magnetic needles react with one another fundamentally depends on the properties of the material. To date ferromagnetic materials have been examined in spintronics above all; with these materials - similarly to iron magnets - the magnetic needles prefer to point in one direction. In recent years, however, the focus has been placed on so-called antiferromagnets to a greater degree, because these materials are said to allow for even faster and more efficient switchability than other spintronic materials.

Scientists from MIT, Arizona State University, National Institute for Materials Science in Tsukuba, UniversitÃ© de LiÃ¨ge in Belgium and Italy's CNR-SPIN have discovered an exotic "multiferroic" state in a material that is as thin as a single layer of atoms.

Their observation is the first to confirm that multiferroic properties can exist in a perfectly two-dimensional material. The findings could pave the way for developing smaller, faster, and more efficient data-storage devices built with ultrathin multiferroic bits, as well as other new nanoscale structures.

Researchers at The University of Manchester and Japan's National Institute for Materials Science seem to have made a significant step towards quantum computing, demonstrating step-change improvements in the spin transport characteristics of nanoscale graphene-based electronic devices. 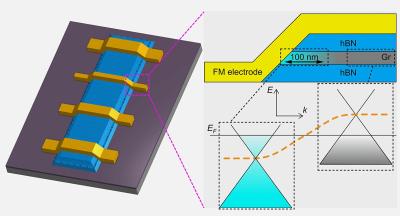 "In this work, we combined spintronics with optics. This is spin-optoelectronics," explains Henri-Jean Drouhin, co-author of the study published and head of the 'Physics and Chemistry of Nano-objects' group at the Irradiated Solids Laboratory (LSI). Light particles, photons, also have a spin. This spin manifests itself in the fact that light can be right- or left-handed circularly polarized (which means that the electric field of the light winds to the right or left like a helix in the direction of propagation of the photons). When this light hits the device designed by the researchers, photons can excite electrons in the material. The spin of these electrons then adopts a preferential direction that depends on the photon spin. Knowing how to selectively extract the electrons therefore makes it possible to obtain information on the polarization of the incident light, making these devices 'spin photodiodes', in contrast to conventional photodiodes that measure the intensity of the light.