Researchers at Tohoku University, the University of Messina and the University of California, Santa Barbara (UCSB) have developed a scaled-up version of a probabilistic computer (p-computer) with stochastic spintronic devices that is suitable for hard computational problems like combinatorial optimization and machine learning. 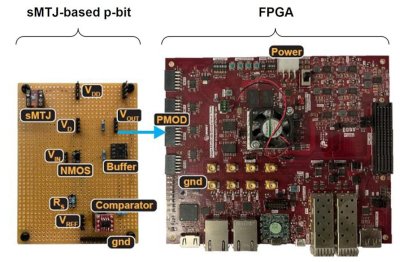 The researchers studied the response of chiral-spin structure of a non-collinear antiferromagnet Mn3Sn thin film to electron spin injection and found that the chiral-spin structure shows persistent rotation at zero magnetic field. Moreover, their frequency can be tuned by the applied current.

Researchers from Johannes Gutenberg University Mainz (JGU), the University of Konstanz and Tohoku University developed a spin-valve structure based on several ferromagnets - which can detect the efficiency of magnon currents depending on the magnetic configuration of the device. 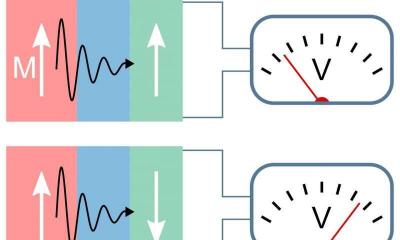 The researchers say that this is a new "building block" for Magnon Spintronics, and this kind of device could be used to the transmission or blocking of incoming spin information.

Tohoku University published a short video that introduces the spintronics research performed at the University's Center for Science and Innovation in Spintronics:

The researchers say that this spintronic device is capable of memorizing arbitral values between 0 and 1 in an analogue manner unlike the conventional magnetic devices, and thus perform the learning function, which is served by synapses in the brain. This is still an early stage (the researchers call this a proof-of-concept demo) but spintronics has a high potential to enable ultra low-power and fast neural-network devices.

Researchers at Tohoku University managed to find the origin and the mechanism of ferromagnetism in Mn-doped GaAs. This phenomonon has been puzzling researchers for over 20 years, and this new explanation may help to accelerate the development of spintronic devices made from such materials. 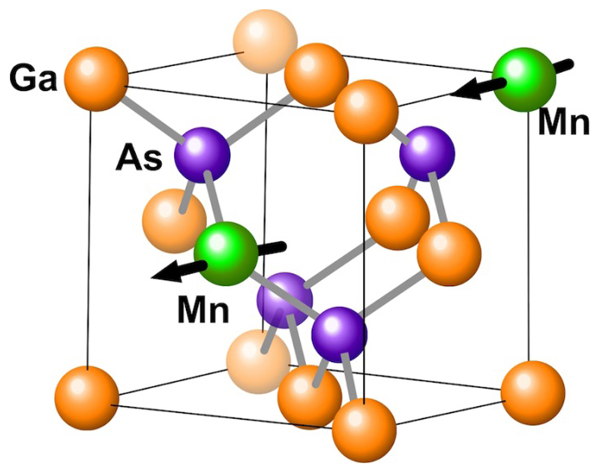 Mn-doped GaAs crystals exhibit characteristics and properties of both semiconductor and magnet. It is possible to use an electric field to control the magnetism in such materials - which makes them very appealing candidates for spintronic devices.

Researchers from Tohoku University and the Japan Science and Technology Agency (JST) have confirmed that surface plasmon resonance can be used to generate spin currents.

Surface plasmon resonance happens when electrons are hit by photos and react by vibrating. It is commonly used in bio-sensors and lab-on-a-chop systems. The researchers have shown that directing light on a certain magnetic material, a spin current can be produced and controlled.

A zigzag-edged graphene nanoribbon is the most magnetic type - and these ribbons are considered the most suitable ones for spintronics applications. Researchers from UCLA and Tohoku University developed a new self-assembly method to fabricate pristine zigzag graphene nanoribbons.

The researchers say they can control the ribbons length, edge configuration and location on the substrate.

NEC and Tohoku's University have jointly developed a new spintronics-based logic prototype chip specifically aimed towards text search systems. Early testing suggest that this new chip has drastically reduced power consumption - 1% or even less compared to conventional systems (DRAM and CPU). This significant reduction was achieved due to the non-volatility of the spintronic circuit which only requires power to necessary circuit blocks and does not require any standby power.

NEC and Tohoku developed new multi-functional CAM cells for text-search logic. The new CAM cells are able to avoid searching for long index texts when searching for short lengths of text within a large amount of index data. This was achieved by setting up combinations (patterns) of input signals that represent long texts. This enables circuits to detect when a long text is input, and to avoid any further unnecessary operations.

Researchers from Tohoku University have shown that electron spins can be preserved for long distances using optimized organic compounds. This is because organic compounds are made mostly from carbon, in which the spinâorbit interaction is quite small. Using fullerene (C60) films the researchers made devices in which electrons traveled up to 110 nm at room temperature while preserving their spin. 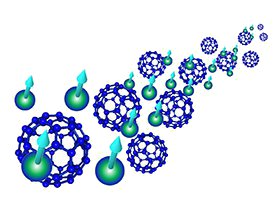 The researchers used fullerence because there's no hydrogen in it (common in other organic materials) and this helps reduce the hyper fine interactions between electron and nuclear spins that can induce spin-flipping events. They built an organic spin valve in which two ferromagnetic electrons are placed in contact with an organic layer.