An international team has, for the first time, designed a material system that exhibits an unusually long-range Josephson effect. Regions of superconducting YBa2Cu3O7 are separated by a region of half-metallic, ferromagnetic manganite (La2/3Sr1/3MnO3) one micron wide.

When two superconducting regions are separated by a strip of non-superconducting material, a special quantum effect can occur, coupling both regions. This is known as the Josephson effect. If the spacer material is a half-metal ferromagnet, it can open up new potential applications for novel spintronic applications.

An international team of scientists from Austria and Germany has launched a new paradigm in magnetism and superconductivity, highlighting the effects of curvature, topology, and 3D geometry.

In modern magnetism, superconductivity and spintronics, extending nanostructures into the third dimension has become a major research avenue because of geometry-, curvature- and topology-induced phenomena. This approach provides a means to improve this and to launch novel functionalities by tailoring the curvature and 3D shape.

The Sofja Kovalevskaja Award, Germany's most highly-endowned research award for early-research scientists, went this year to Dr Angelo Di Bernardo from Cambridge University. Dr. Angelo was awarded with 1.65 million Euros and will move to the University of Konstant in which he will establish a research hub in the field of superconducting spintronics.

Dr. Angelo's project that won the award is dealing with superconducting spintronics with oxides and 2D materials.

Researchers from the Lomonosov Moscow State University together with British scientists discovered that superconductivity is able to promote magnetization in certain conditions. Using this effect may lead to faster spintronic devices. 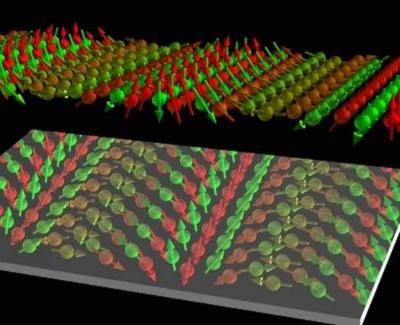 The researchers say that superconducting spintronic devices will demand far less energy and emit less heat compared to current devices. The superconductors may be useful in the process of spin transportation while ferromagnetics may be used to control spins.