University of Groningen researchers have measured the presence of electron-spin-dependent nonlinearity in a van der Waals heterostructure spintronic device. The team went on to demonstrate its application for basic analog operations such as essential elements of amplitude modulation and frequency sum (heterodyne detection) on pure spin signals, by exploiting the second-harmonic generation of the spin signal due to nonlinear spin injection. 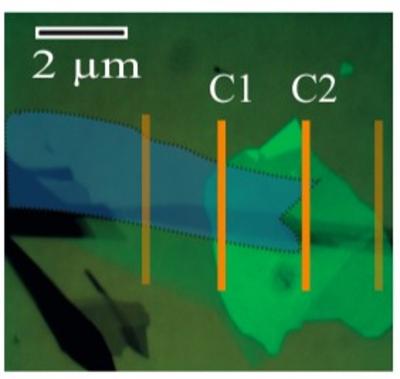 The researchers also showed that the presence of nonlinearity in the spin signal has an amplifying effect on the energy-dependent conductivity-induced nonlinear spin-to-charge conversion effect. The interaction of the two spin-dependent nonlinear effects in the spin-transport channel leads to a highly efficient modulation of the spin-to-charge conversion effect, which in principle can also be measured without using a ferromagnetic detector. These effects are measured both at room and low temperatures, and are suitable for their applications as nonlinear circuit elements in the fields of advanced spintronics and spin-based neuromorphic computing.

The scientists from the University of Groningen have shown in this new work that nonlinear effects that are particular to electron spin can be achieved using 2D boron nitride. Previously, they had already shown that injecting a current through a boron nitride bilayer, to which a small DC bias current was applied, resulted in a very high spin polarization, which means that there is a large difference between the numbers of spin-up and spin-down electrons. They have now shown that the polarization increase can be attributed to nonlinear processes that influence the electron spins.

The nonlinearity means that two spin signals multiply, rather than add up (which would be a linear effect). Furthermore, in the nonlinear regime, spin signals can be measured without using ferromagnets. Earlier, all these effects were either absent or very weak in a typical graphene spintronic device. âAll because of this nonlinear effect, which increases in proportion with the bias current,â says Siddhartha Omar, a former postdoctoral researcher at the University of Groningen and first author of the paper. âPolarization can even reach 100 per cent. Since it is nonlinear, you give less and get more during the injection when this current is applied.â

In the study, Omar and his colleagues in the Physics of Nanodevices group at the Zernike Institute for Advanced Materials, University of Groningen, show applications of the nonlinear effect for basic analogue operations, such as essential elements of amplitude modulation on pure spin signals. âWe believe that this can be used to transport spin over larger distances. The larger spin signal also makes spin-charge conversion easier and that means that we no longer need ferromagnets to detect them.â

The ability to modulate a spin signal, rather than just switch it on or off, also makes it easier to construct spintronic devices. Omar: âThey could be used in spin-based neuromorphic computing, which uses switches that can have a range of values, rather than just 0 or 1.â It also seems possible to create a spin current amplifier, which produces a large spin current with a small bias voltage. âIt may be there already, but we still have to prove it,â says Omar.

All these effects were measured both at low temperatures and at room temperature and could be used in applications such as nonlinear circuit elements in the fields of advanced spintronics. âSpintronics is now at the point where regular electronics was after the introduction of the first transistors. We could now build real spintronic devices,â concludes Omar.