Researchers have recently demonstrated the long-range transport of magnetic hedgehogs, 3D topological spin structures that are often observed in common magnets. Their work could have important implications for the development of spintronic devices. 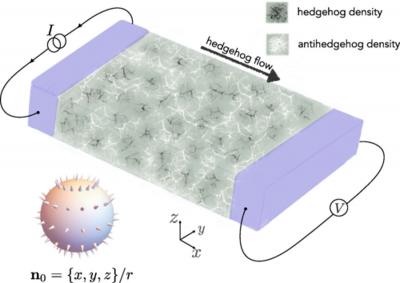 Shu Zhang, one of the researchers who carried out the study, explained that the research team's idea was to resort to topological spin textures rather than spins themselves for the purpose of long-range transport, since the magnetic hedgehog is one type of topologically protected spin texture that generically exits in three-dimensional magnets. Their work shows that the hedgehog current is a well conserved quantity and can be explored to achieve long-range transport in magnetic insulators.

The recent study by Zhang and colleagues is based on a theoretical construct known as the topological conservation law, which allowed the researchers to leverage the idea of hydrodynamics of topological spin textures. This idea has previously been explored in a series of studies led by physicist Yaroslav Tserkovnyak.

"The main theoretical approach we applied in our study is classical field theory," Zhang explained. "We describe the space-time distribution of the spins as a continuous vector field, on top of which the topological textures and their currents can be defined and studied. We found that the mathematical description of the hedgehog currents actually bears an analogy to the most renowned field theory, that of electromagnetism."

When they set out to investigate long-range transport, the team specifically considered a 'typical' experimentally feasible setup, in which a hedgehog's current is injected and detected using metal contacts attached to the two ends of a magnet. In their paper, they propose that in this scenario, a magnet could be seen as a conductor that transports the current of topological spin textures with a finite conductance. This idea ultimately highlights the potential of using magnetic insulators to achieve transport over long distances.

"I think it is very exciting to envision the possibility that regular magnetic insulators can be used for long-range transport," Zhang said. "This will make the realization of various spin circuitries possible with high energy efficiency because of the absence of Joule heating."

In the future, the study could inspire other research teams to investigate the transport dynamics of topological spin textures further, particularly those of magnetic hedgehogs, which are widely available. The development of effective strategies to control these dynamics would ultimately open up new possibilities for enabling the long-distance transmission of information in spintronic devices using 3D magnetic materials.

"We hope to see our ideas tested in experiments soon," Zhang said. "Our current work is based on classical or semiclassical considerations of spins. In the future, it would be interesting to see how topological spin textures could contribute to the transport in quantum magnets."