Recent studies have suggested that 2D skyrmions could be the genesis of a 3D spin pattern called hopfions, but no one had been able to experimentally prove that magnetic hopfions exist on the nanoscale. Now, a team of researchers co-led by Berkeley Lab reported the first demonstration and observation of 3D hopfions emerging from skyrmions at the nanoscale in a magnetic system. 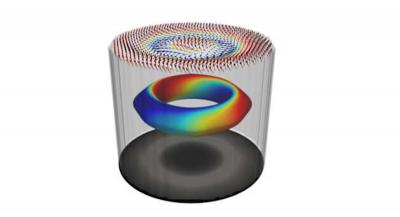 The researchers say that their discovery is a major step forward in realizing high-density, high-speed, low-power, yet ultrastable magnetic memory devices that exploit the intrinsic power of electron spin.

"We not only proved that complex spin textures like 3D hopfions exist—We also demonstrated how to study and therefore harness them," said co-senior author Peter Fischer, a senior scientist in Berkeley Lab's Materials Sciences Division who is also an adjunct professor in physics at UC Santa Cruz. "To understand how hopfions really work, we have to know how to make them and study them. This work was possible only because we have these amazing tools at Berkeley Lab and our collaborative partnerships with scientists around the world," he said.

According to previous studies, hopfions, unlike skyrmions, don't drift when they move along a device and are therefore excellent candidates for data technologies. Furthermore, theory collaborators in the United Kingdom had predicted that hopfions could emerge from a multilayered 2D magnetic system.

The current study is the first to put those theories to test, Fischer said.

The multilayered materials were prepared by UC Berkeley postdoctoral scholar Neal Reynolds under the supervision of co-senior author Frances Hellman.

Hopfions and skyrmions are known to co-exist in magnetic materials, but they have a characteristic spin pattern in three dimensions. So, to tell them apart, the researchers used a combination of two advanced magnetic X-ray microscopy techniques—X-PEEM (X-ray photoemission electron microscopy) at Berkeley Lab's synchrotron user facility, the Advanced Light Source; and magnetic soft X-ray transmission microscopy (MTXM) at ALBA, a synchrotron light facility in Barcelona, Spain—to image the distinct spin patterns of hopfions and skyrmions.

To confirm their observations, the researchers then carried out detailed simulations to mimic how 2D skyrmions inside a magnetic device evolve into 3D hopfions in carefully designed multilayer structures, and how these will appear when imaged by polarized X-ray light.

"Simulations are a hugely important part of this process, enabling us to understand the experimental images and to design structures that will support hopfions, skyrmions, or other designed 3D spin structures," Hellman said.

To understand how hopfions will ultimately function in a device, the researchers plan to employ Berkeley Lab's unique capabilities and world-class research facilities—which Fischer describes as "essential for carrying out such interdisciplinary work"—to further study the quixotic quasiparticles' dynamical behavior.

"We have known for a long time that spin textures are almost inevitably three dimensional, even in relatively thin films, but direct imaging has been experimentally challenging," said Hellman. "The evidence here is exciting, and it opens doors to finding and exploring even more exotic and potentially significant 3D spin structures."